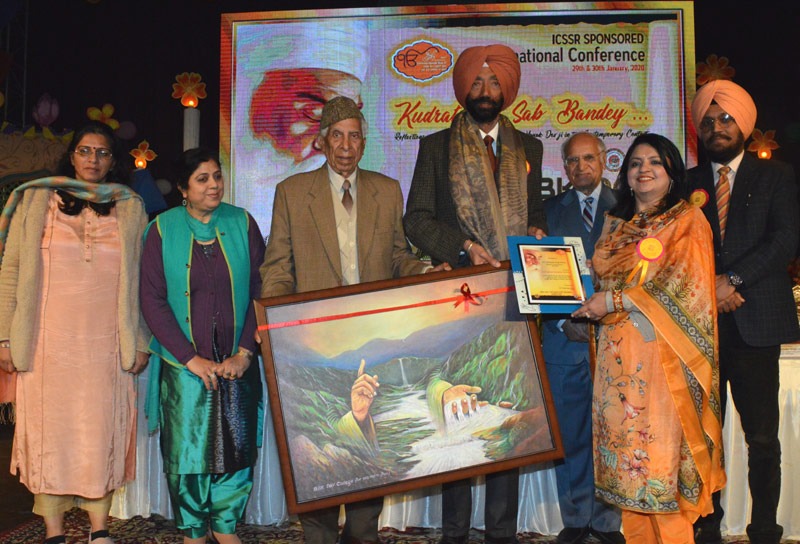 Principal Dr. Pushpinder Walia thanked the dignitaries and resource persons for being a part of the conference, organized to commemorate his 550th birth anniversary. She said that the conference is a tribute to the Jagat guru-Guru Nanak Dev Ji and an attempt to spread the message of oneness.

While addressing the gathering, Deputy Commissioner Sh. Shivdular Singh Dhillon congratulated Principal Dr. Pushpinder Walia for organizing the conference on Guru Nanak Dev Ji’s life and philosophy and said that it is nearly impossible to comprehend Guru Nanak and his teachings in totality as he was not just the founder of Sikhism but also a visionary, a poet, a scientist and the lessons he gave transcend the boundaries of religion.  Guru Nanak, through his bani, continues to inspire us all even today.

Expressing his views, Dr. Lakhwinder Singh Gill said that every verse of Gurbani upholds the values of mankind. There is a dire need to acquaint the younger generation with the teachings of Guru Nanak.

In his Valedictory address, Prof. (Dr.) Jagbir Singh said that it is imperative for the society, particularly the younger generation to be acquainted with the teachings of Guru Nanak Dev Ji so that his philosophy of universal brotherhood, religious tolerance as well as social and gender equality illuminates the world and ushers in a noble ideal society.

While giving the Presidential remarks, Dr. Ramesh Arya said that the conference organized by the college is an endeavor to reiterate the relevance of Guru Nanak’s teachings in the contemporary context. Also, he applauded the efforts of the college Principal and staff for organizing the conference and conveyed that embracing the qualities of selflessness, equality and humility would be real tribute to Guru Nanak.

It is pertinent to note that during the two day conference, more than 50 resource persons from various colleges and universities, within India and abroad participated in various technical sessions. These resource persons were presented certificates during the valedictory session. At the end of the programme, ‘Ek Onkar- Ek Roohani Gaatha’, a ballad presenting glimpses of Guru Nanak Dev Ji’s life was staged by members of student council and other students from Department of Music, Theatre and stage craft.