While speaking on the occasion, Principal Dr. Pushpinder Walia said that Lala Lajpat Rai was deeply influenced by the ideas and perspectives of Swami Dayanand Saraswati and Mahatama Hansraj, and he had also helped in founding the first DAV School at Lahore. She further said that Lala Lajpat Rai was of firm belief that Vedas should be accessible to all and lower castes should be allowed to recite the Vedas and seek knowledge from them. She also highlighted that Lala Lajpat Rai led a non-violent march in protest against Simon Commission, in which he was fatally injured.  Lalaji said that the blows struck against him will be the last nails in the coffin of the British rule in India.

Prof. Dr. Harmohinder Singh Bedi spoke about the life history of Lala Lajpat Rai. He said that Lala Lajpat Rai was a great Nationalist Leader who fought for the Independence of India. Lalaji is also remembered as ‘Punjab Kesari’ and ‘Sher-e-Punjab’ by whole of Punjab. He further said that Lalaji was a great educationist who wrote his first book on Shivaji. He took out two newspapers ‘Vande Mataram’ and ‘Punjabi Dunia’. He also told that Lala Lajpat Rai was a very eminent lawyer and he joined Arya Samaj in 1882. Lala Lajpat Rai used to write all the activities and events of Arya Samaj in his diary. He wrote a book on Arya Samaj that was later translated in twenty Indian languages. He used to teach Hindi in DAV College, Lahore and Bhagat Singh was one of the students of Lalaji. Asian historians have written that the home of Lalaji was the home of many freedom fighters of Punjab. Historians compared Lalaji with Gokhle. Madan Lal Dhingra also highlighted Lala ji in his book. When Lalaji was taking his last breath, Bhagat Puran Singh of Pingalwara was sitting near him. Lalaji had a very big library. Many libraries in Punjab are named after him. He also worked to strengthen Punjab economically and was also head of “Lakshmi Insurance Company” and he initiated “Punjab National Bank”.

Sh. Sudarshan Kapoor, Chairman, LMC, in his address, said that Lala Lajpat Rai was one of the five members of the committee formed to established DAV institution after the death of Swami Dayanand Saraswati. Dr. Shelly Jaggi, Associate Professor, Department of Hindi, conducted the online seminar. Dr. Anita Narendra, Head, Department of Hindi, gave the vote of thanks. The members of Local Managing Committee and Arya Samaj, staff and students of the college enthusiastically participated in the online webinar. 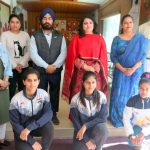 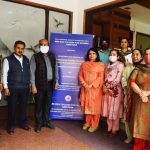 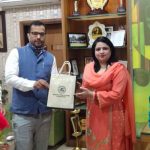